Another problem is that Trypanosoma rangeli looks very much like T. cruzi and can lead to misdiagnosis. T. rangeli is a trypanosome that is infective for humans and other animals but is nonpathogeneic to humans (but detrimental to the insect!). The chief insect host is R. prolixus. The trypomastigotes are discharged in the saliva rather than the feces. It looks morphologically like T. cruzi and has an overlapping geographical distribution.

Xenodiagnosis is a method of diagnosis first described by Alexander Joseph Emile Brumpt  (1877-1915). Laboratory-reared non-infected triatomines are allowed to feed on patients suspected to have Chagas disease. It is not painful, but the jar is usually covered in foil so as not to  arouse anxiety in the  patient.  The bugs are then examined 3-4 weeks later for the presence of T. cruzi in the hind gut/excreta; T. rangeli will be found in the salivary glands. Although this method is quite efficient in diagnosing the acute disease, it may be only 50% efficient in the chronic stage. Whereas 1 µl of blood can be viewed (with patience) on a microscope slide, 10 triatomines can sample 1 ml of blood. The efficiency of this technique is complicated by variable growth of different T. cruzi isolates in different genera and species of reduviids. This method has a sensitivity of approximately 50%.

The uninfected bugs are in a vial covered
with gauze and strapped onto the arm of the patient.

These techniques are more sensitive, but in some cases are subject to false positives due to cross-reactivity of antigens common to other trypanosomatids. Serology can detect nearly 100% of chronically infected patients, but false positives with Leishmania and T. rangeli occur.

Gives results in a few hours. Antigen is bound to glass slide, which is incubated with serum. Anti-T. cruzi antibody is then bound by a fluorescent-labeled anti-constant region antibody. Visualized by microscopy. Detects IgG and IgM antibodies. Can be performed with spots of blood on filter paper (antibody eluted later) - i.e. good for field studies.

Gives results in a few hours. Again, specificity is determined by the quality of antigen. Mucin extracts give good selectivity in a recently-reported assay. Very sensitive assay. Improvements include changing from an immunoperoxidase reaction to a chemiluminescent reaction.

There are two major criteria for successful PCR detection of a parasite (or any microorganism):

Specificity -- must detect only the T. cruzi parasite

Sensitivity -- how few parasites can the assay detect?

In 1989, these criteria were fulfilled for T. cruzi by several gene targets that represent multicopy kinetoplast and nuclear DNA. Both of these assays can detect at least 10 organisms in 100 µl of blood.

Kinetoplast DNA minicircles are catenated together into a single giant network situated in the single mitochondrion of the cell. There are about 10,000 minicircles per network. Each minicircle has four copies of a conserved region that represents about 40,000 copies of the annealing target.

There are multiple minicircle sequence classes defined by the sequence of the variable regions. Morel et al. (1980) showed that high resolution gel analysis of restriction enzyme digested kinetoplast DNA yielded a complex pattern of bands and that these patterns varied between different isolates of T. cruzi. They coined the term, schizodeme, to indicate a strain of T. cruzi that has similar kDNA restriction patterns. 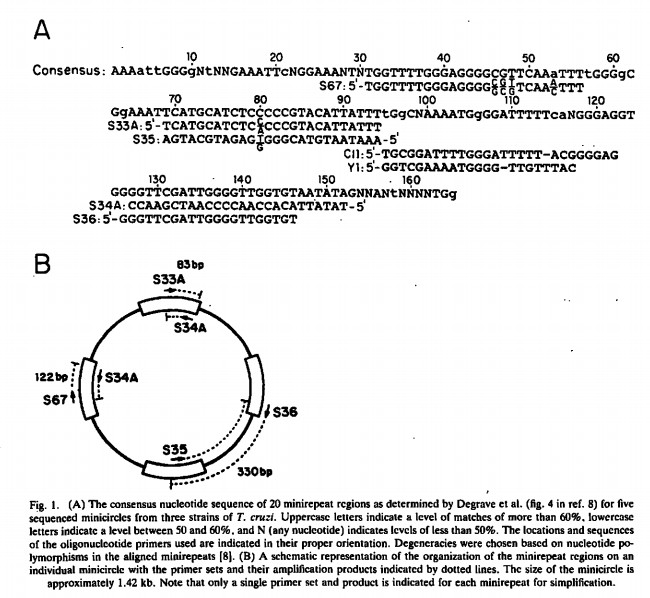 Sturm et al. (1989) showed that fragments of minicircles could be amplified using primers within the conserved regions. The Figure above shows the primers used to obtain an 83 bp, 120 bp or 300 bp product. The 300 bp product contains the variable regions of all the minicircles and therefore contains strain information also.

The amplification worked equally well with kDNA from several T. cruzi strains and did not occur with kDNA from other kinetoplastids. The lower limit was approximately 10 trypanosomes. A billion fold excess of human DNA had no effect on the PCR.

The kDNA PCR method was used on a panel of 114 blood samples from chronic Chagasic patients by Avila et al. (1993) and shown to have a sensitivity of 100%. In addition all of the serology-positive and xenodiagnosis negative samples were PCR-positive. Improvements to the method involved the collection of blood in a guanidine-EDTA reagent that lysed the cells and preserved the DNA without refrigeration, cleavage of all minicircles in the network by a chemical nuclease and the use of non-radioactive visualization technology. An example of positive PCR results for the amplified 330 bp fragment from patients' bloods. From Avila et al. (1993).

Recent improvements to this method including the use of boiling the blood lysate instead of chemical nuclease digestion to cleave minicircle DNA have led to the ability to detect 0.1 fg 330 bp DNA (a single parasite cell has 15 fg DNA). Quantitative PCR using the amplification of kDNA minicircle fragments was also used to detect 3-260 parasites per ml of infected rat blood, and in one chronic human patient, 4 parasites per ml of blood were detected.

Click here to see an article in pdf format about the development of this assay.

PCR amplification of a 194 bp repetitive nuclear DNA fragment from T. cruzi  present at about 10,000 copies per cell

This method allowed the detection of one parasite in 10 ml of blood. A comparison of the sensitivity of the PCR method and microscopic methods for detecting T. cruzi in blood of infected mice was performed by Kirchoff et al. (1996). They showed that in the acute phase, parasites were detected 3.9 days earlier by PCR than by microscopy. In the chronic phase, the mice were consistently positive by PCR but parasites were only detected intermittently by microscopy.

The major problems with the use of PCR detection of T. cruzi include the cost, the need for specialized equipment, and the frequency of contamination with previously amplified products, which produces false positives.